The lectionary Gospel reading for Wednesday of Holy Week finds us reflecting on Judas’ betrayal of Jesus.

I recently heard in the midst of a sermon a reflection upon the betrayal of Judas and the betrayal of Peter. Both betray Jesus, both experience remorse and even repentance (remember, Judas tries to undo his act of betrayal only to find that sin unleashes uncontrollable consequences… trying to manage our sin is like trying to manage a wild lion… it can’t really be done).

But their stories — Peter’s and Judas’ — end very differently.

We only know Judas by his failure, but we see Peter’s failure simply as one step on a journey to great leadership and influence in the church.

We all betray Jesus. That is one of the core messages of Holy Week. We are guilty.

The question is how will our stories end? With misery or redemption?

And more so… the question for the church at-large… will we allow people’s stories to come to completion? Will we allow the work of divine reconciliation and redemption? Or will we define people more by their failures than the redeeming work of Jesus in their lives?

Every year I set some personal goals for myself — some are successful, some are not. But I think it is a good discipline.

2009 was a crazy (aka hellish) year for me — and most of my goals went right out the window. However, I did lose 20 pounds in 2009 (and 30 to date), so that is a good thing. I also achieved some significant financial goals this past year.

I just finished my taxes and that is when I usually evaluate how I did in terms of personal financial stewardship.

Personally, I only look at four metrics for my finances: Income, Giving, Saving & Debt.

But I managed to almost eliminate all consumer debt (I paid off my last credit card in January) and am now debt free with the exception of student loans — and plan to stay that way.

In terms of savings, I am not in great shape. I pretty much used my entire emergency fund to get through the year, but now am rebuilding it.

In terms of giving… my actual cash donations (tithes, offerings and missions support) was 13% of my gross income and 16% of my net income. My goal is to increase my giving by 1% a year and this year I met that goal.

My goals/projections for the coming year:

Why do I tell you all this?

When I was a pastor I was always very open and transparent about my finances. I think that is important. Also, as a big fan of Dave Ramsey, I like to share the success I am experiencing following his Financial Peace Principals. I hope it encourages others to keep at it! Finally, I hope it challenges and encourages you to be intentional about your financial goals and your personal giving.

I could list for you all the goals that I failed to achieve last year — but that is another post.

(By the way, another goal I reached was “to cook more in the coming year” — that one I achieved in spades, lol).

DO YOU SET GOALS?

DO YOU WRITE THEM DOWN?

DO YOU EVER EVALUATE HOW YOU ARE DOING ON THEM?

In many church traditions — especially among the Orthodox church — Tuesday of Holy Week is taken as a time to reflect on Christ as the Bridegroom of the church.

Creating A Culture of Honesty in the Church

A few weeks ago I gave a guest sermon at Riverfront Family Church in downtown Hartford. The topic was “Creating A Culture of Honesty in the Church” — this was the first sermon I have given in 10 months.

A bunch of folks asked if I would post it, so here it is… thoughts and comments welcomed.

Posted by Ben Dubow on March 30, 2010 in Uncategorized

Tonight marks the beginning of the Passover celebration. I always like when Passover falls on Holy Week — because you can’t really understand the Passion of Jesus apart from the Passover.

Whenever I get frustrated or angry — at the lack of grace, the absence of forgiveness, the rejection by community — I am reminded again and again of the faithfulness of God: Hos grace, His forgiveness, and His promise to never leave nor forsake us, no matter our failures.

Pray for me as I pray for you this Passover season and Passion Week.  Please let me know specifically how I can be praying for you! (Either leave a comment or use the “Contact Me” link above.)

Posted by Ben Dubow on March 29, 2010 in Uncategorized

12Jesus entered the temple area and drove out all who were buying and selling there. He overturned the tables of the money changers and the benches of those selling doves. 13“It is written,” he said to them, ” ‘My house will be called a house of prayer,’ but you are making it a ‘den of robbers.’”

14The blind and the lame came to him at the temple, and he healed them. 15But when the chief priests and the teachers of the law saw the wonderful things he did and the children shouting in the temple area, “Hosanna to the Son of David,” they were indignant.

16“Do you hear what these children are saying?” they asked him.
“Yes,” replied Jesus, “have you never read,
” ‘From the lips of children and infants
you have ordained praise’?”

17And he left them and went out of the city to Bethany, where he spent the night.

Monday of Holy Week brings us to the temple and Jesus’s overturning of the tables and money changers. In this we see a righteous anger from Jesus that we have not seen before.

This scene is filled with important themes: Jesus’s anger at injustice (the money changers were most likely set-up in the Court of the Gentiles and were therefore making it difficult for Gentiles to worship at the temple); and his challenge to earthly authority and institutional power (even… and especially… religious institutional power). This conflict also sets the stage for why the religious leaders want to arrest and kill Jesus.

But even more importantly, this scene paints Jesus in the long tradition of Old Testament prophets. This is what is known as an “enactment prophecy” (think Ezekiel, for example)– the act itself is the prophecy. Jesus is fulfilling all that had been written and spoken before him…

The Passion of Jesus… His cross… His death… His resurrection… is indeed about salvation for people. But it is not only about salvation for individuals. It is about much more — destroying injustice, fighting earthly powers and principalities, and redeeming all of created order.

This scene in the Gospels is a reminder that we should not be fooled by the King on the Donkey… He comes in peace, but is also a Warrior King who will stop at nothing to redeem his people, establish His Kingdom, and seek justice, righteousness and shalom.

Posted by Ben Dubow on March 29, 2010 in Uncategorized

Passion: From Palms to the Cross 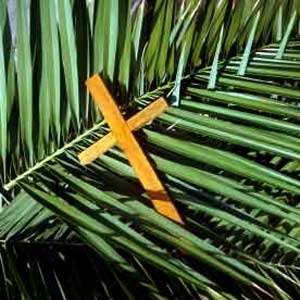 I love Palm Sunday and reflecting on the Triumphal Entry, especially as we begin our Holy Week journey together. I was able to be in church this morning and we reflected on the narrative and shared communion together.  Very powerful.

For me, I cannot separate Palm Sunday (“Hosanna! Hosanna in the Highest!”) from Good Friday (“Crucify Him! Crucify Him!”)

Here is a sermon I gave on Palm Sunday 2008 called “Palms to the Cross”… I would love to hear your thoughts and hope it blesses you as you begin your Passion Week journey.

Posted by Ben Dubow on March 28, 2010 in Uncategorized